Stink bugs can be a nuisance for farmers, gardeners, and homeowners right across the U.S. During the spring and summer, stink bugs can inflict considerable damage in your garden by sucking the sap from plants and feeding on fruit and vegetables. When the weather cools, the stink bugs look for a warm shelter in which to overwinter, and your centrally-heated home is perfect!

Although stink bugs don’t bite or carry disease, they do emit an unpleasant odor when disturbed. The bottom line; stink bugs are not desirable house guests, nor do you want them rampaging through your garden!

So, how do you get rid of stink bugs?

Perhaps the most effective way to kill this nuisance pest is to use a stink bug spray. In this Buyers’ Guide, we’ll look five of the very best stink bug sprays that are currently on the market. Simply click on the product links to view the full spec, place your order, and say goodbye to your unwanted insect visitors!

TERRO stink bug spray is a very effective insecticide that is designed for indoor use. Spray the product into cracks and crevices where stink bugs may seek shelter to keep them away.

Buggslayer is a concentrated insecticide that works on over 50 species of insect pests, including stink bugs. This product is formulated for outdoor use only.

Harris stink bug killer comes in a one-gallon container and offers excellent value, allowing plenty of scope for repeated applications if necessary. The product container also includes an extended-reach trigger sprayer, so you won’t need to buy one separately. 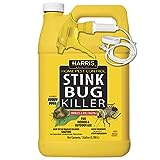 If you prefer not to use chemical pesticides around your home, you might want to try a natural stink bug killer such as neem oil. Neem oil kills stink bugs and other invasive insects by suffocating them. 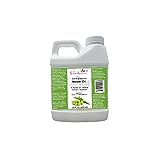 How to identify stink bugs

The marmorated stink bug originates from Asia. It’s thought that the pest was accidentally introduced into the U.S. in the late 1990s. By 2010, the stink bug had become a common agricultural pest right across the country.

Stink bugs are easy to spot! The marmorated stink bug is about 5/8 inch in length and marbled brown and cream in color. The insect’s body is distinctively shaped like a knight’s shield. If you look at the underside of plant leaves, you might spot several dozen clutches of light-colored, oval eggs. As every female stink bug can lay up to 500 eggs during her lifetime, you can see just how quickly an infestation can develop.

There are two other species of stink bugs – green and brown. You might see these in your garden, overwintering in garden debris and tree bark. But it’s only the marmorated stink bug that heads for your cozy home when the temperature drops.

A telltale sign of stink bug activity is wilting leaves, prematurely falling blossoms and white or yellow spots on fruit.

How to get rid of stink bugs in your garden

Your first job in preventing stink bug activity in your garden is to clear away piles of debris, including wood piles and rocks. That will prevent stink bugs from overwintering, allowing frosts to kill them off naturally.

If you have a small garden, you can cover rows of veggies and fruits with polyester covers, although this does exclude beneficial pollinators too.

An effective, if rather a laborious method of removing stink bugs is to “frighten” them off. Place a bucket of soapy water underneath the infected plant or tree and disturb the insects. They will then drop off into the bucket of water where you can dispose of them.

A very effective method of killing stink bugs is through the use of insecticides. There is a wide range of chemical pesticides that work against stink bugs in your garden and which can also be safely applied to fruit and vegetable crops.

Inside the home, chemical sprays can be very effective in controlling stink bugs when applied to cracks in ceilings and walls and when used along the building’s perimeter. Unfortunately, using insecticides indoors does come with a couple of drawbacks. Firstly, pesticides contain chemicals that are toxic to people and pets. Secondly, dead stink bugs lying around inside the house attract carpet beetles, another undesirable house guest.

If you prefer to use a natural remedy to get rid of stink bugs in your garden and home, you might want to try using neem oil.

Neem oil is derived from the seeds of the neem tree, a species of tree from Southeast Asia. Neem oil contains a naturally-occurring, EPA-approved chemical compound called azadirachtin, which works in several ways, including:

Neem oil also has repellent qualities when used to create a barrier around the perimeter of buildings. This natural remedy is also comparatively cheap when compared to synthetic chemical insecticides, although you may need to buy more than one container to cover your home and garden.

The main drawback to using neem oil to kill and repel stink bugs is that it does degrade pretty quickly when exposed to sunlight. That means you’ll need to reapply the oil throughout stink bug season if the effects are to be meaningful.

Before the colder weather arrives and stink bugs head for your home, there are some preventative measures you can take to keep them out.

These simple steps will make your home far less accessible to stink bugs.

In this section of our comprehensive Buyers’ Guide, we’ll answer some commonly asked questions about stink bugs. If you don’t see the information you need, send us an email, and we’ll do our best to answer your question!

A:         Stink bugs are attracted to your home when the weather cools down. These pests can’t survive in very low temperatures, that’s why they like to share your cozy home during the winter. Note that stink bugs release an aggregation pheromone that attracts other stink bugs, so where there’s one, you’re bound to find more!

A:         Stink bugs don’t bite, and they don’t carry diseases. So, stink bugs aren’t dangerous, unless you’re a plant or an apple! However, when disturbed, these large and noticeable insects emit a foul smell, which is why most homeowners don’t want them around.

A:         Stink bugs feed on plant sap and fruit. Unlike other household pests, they don’t eat wood, carpet, or clothes, so your home furnishings aren’t in any danger.

A:         Yes, vinegar does kill stink bugs. Mix two cups of hot water, one cup of vinegar, and ½ a cup of dish soap in a spray bottle. Spray the stink bugs liberally with the mixture, and they will quickly expire. Bag the dead stink bugs and dispose of the bodies.

Stink bugs are a menace in your garden, damaging plants, fruit, and veggies as they feed. These large insects also make their way into your home when the weather gets colder in the fall. In spring, the stink bugs emerge from their warm hiding places and head back outside into your garden to wreak havoc on the spring growth you’ve been carefully cultivating.

You can kill stink bugs by using any of the products we’ve featured in our Buyers’ Guide.

We especially like Harris Stink Bug Killer. Although it’s initially more expensive than some comparable products, you do get several repeat treatments from one container, making it pretty decent value for money.

You can safely use Harris’ EPA-approved product inside and outside your home, the effects are long-lasting, and the container comes complete with a spray attachment, so you won’t need to buy one separately.